April 28, 2021
It's been a busy several months! Let me see if I can sum-up... Our second COVID test came back negative, so we moved back to Picasso in late August. Classes at The UWI Cave Hill began in September, so I was right on time. My classes were/have been 100% online, and that was challenging, since I really like to drag students into the field. Hopefully next term I'll be able to do that. Still, teaching online wasn't that bad for me, as I have prior experience doing so: I pioneered the Geography department's online program at University of Colorado Denver when I was there, and helped create an online master's degree program while I was at ASU. I also worked for Western Governor's University, which is a fully online university. So I am familiar with online pedagogy. Things went well the first semester, even amidst COVID-era restrictions: we explored, we played in the ocean a lot, we set-up our house, we went to the movies (when that was not happening anywhere else in t
Read more

August 29, 2020
Getting back to our home amidst a pandemic was no easy task. Especially considering we have been nomadic for the past half-decade. Seriously. Since summer 2015, we have moved 7 (seven!) times, four of which were international moves. Now, we did have a “house” at each place, but it took a couple years before realizing what it took to make each house more of a “home”. Before that, we were used to traveling for a couple/few weeks at a time, and that’s no big deal. But actually living in a new place – getting an address, doctor, dentist, chiropractor, and learning where to shop – is totally different than visiting a place. We found that taking a few precious items with us to each place helped. We also learned that certain smaller items did a lot to make a place feel more like a home. Fluffy towels. A couple rugs. A couple pieces of artwork. Refrigerator magnets. All of which we could either pack with us or purchase inexpensively once we arrived. Now, we are home. Back in Barbados. We r
Read more

The Power of the Fulbright Program

The Fulbright mission, “…to increase mutual understanding and support friendly and peaceful relations between the people of the United States and the peoples of other countries,” remains a dominant driving force in cross-cultural communication and appreciation. I’m proud to be part of the Fulbright Family. I stand ready to help anyone who is thinking of pursuing a Fulbright opportunity. The program is, quite frankly, amazing. One of the Forgotten Fortresses of the Eastern Desert: Qasr Q'ilat  (Castle-castle). It's really a dam that's been there since, according to my Bedouin guide taking a smoke break on the dam, Roman times. He showed me Roman engravings. This is OUT IN THE MIDDLE OF NOWHERE. But such a neat place! I ’ ve had some time to reflect on our experiences in Jordan, now that we ’ ve begun settling back into life in the States. And here's the thing: I have absolutely nothing bad to say about the experience  –  or the Kingdom, or its people. I can hones
Read more

Jordan in the Raw...

When we first arrived in Amman, it was winter. A little chilly, but pleasant. It snowed several times. I noticed how the city was always changing , and the role its vernacular landscape played in the change. But there was something about the city I couldn’t quite describe. All the adjectives I thought of just didn’t accurately portray what I was observing. Then Kaelin said, “…it’s raw.” After a lot of thought, I agree. Jordan is raw . This has led to many great discussions over the last several months. Just so you know, I don’t consider “raw” a bad thing. It’s just a non-pretentious, what-you-see-is-what-you-get type of word to me, especially when applied to place. Like definition 2c : “[N]ot being in polished, finished, or processed form.” Essentially, something which has potential to be much more, but is not quite there yet. That describes Amman – and the country as well. It’s a young Kingdom, still finding its way and deciding who it wants to be. It’s striving to be a country
Read more

Ruins. One word that always seems to make me giddy. I’ve always liked ruins – especially the ones you can climb on/around/over/under/in and explore. That’s how it’s been ever since I was a little kid and my parents took my brother and me to Mesa Verde’s Anasazi ruins. Jordan has lots of ruins. Like a lot a lot. People have been inhabiting this region of the world for a long time, so the ruins span millennia. Yes, there are the well-known ruins like Petra and Jerash , and lesser-known places like Kerak and Umm Quaiys. But the Kingdom also hosts numerous others, some of which barely have a name, and others that are literally in the middle of nowhere. These forgotten fortresses have been a big component of my research here. Qasr az-Zahib . As I was taking pictures, a little Bedouin kid who was out herding sheep and goats came over with tea. We chatted a bit. He showed me a nearby cemetery, a still-functioning well, and another set of presumed Crusader ruins that I can't fin
Read more

After pretty much traversing Jordan’s width and breadth – from Aqaba in the south to five miles from the Syrian border in the north and the Dead Sea in the west to As-Safawi in the east – there’s one place we keep returning to again and again: Shobak (sometimes spelled Shabak or Shawbak). Yes, the Dead Sea Highway is quite unique, the Eastern Desert magical, and Wadi Rum vast. But Shobak is...well...different. Kind of a high plains desert that captures all my favorite components of each major physiographic province in Jordan.  Shobak is about a two-hour drive from Amman, along the Desert Highway and en route to Petra. The town itself is best known for its castle . Built along the caravan/pilgrimage route between the Gulf of Aqaba and Syria by King Baldwin I in 1115 AD, it stood for several decades and repelled Saladin’s forces for two years later in that century. It’s also out of the way – you can’t see it from any main by-pass road as you can with other castles like Karak, Azraq,
Read more 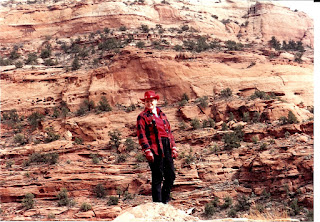 Dixie in her natural habitat: outdoors. Here in Southern Utah, 1993 When I was a little kid, Dixie (my mom) was into Native American (Indian) things. Actually, she was always interested in them. And because she was, and we spent a lot of time together, I became interested in Indian things too. We spent time discussing ancient native cultures, her (some would say wild) theories about them, and the more spiritual/mystical aspects often tied to the rich cultural heritage. She also liked “glyphs”, as she called them, and I soon became aware that these glyphs – rock art – were found in almost every culture around the world. Fast forward to my PhD work where, by luck really, I ended up studying rock art (though not in the traditional archeological sense) – and in the Desert Southwest US, no less. I learned there are four main types of rock art: petroglyphs (those carved or pecked into the rock), pictographs (paintings on rocks), intaglios (scraping away of a surface to reveal ligh
Read more
More posts